How Long Can A Baby Sleep In A Bassinet? Comprehensive Guide

It’s normal to be concerned about how long your baby can sleep in a bassinet before deciding whether or not it’s time to transfer to a crib.

There is no one-size-fits-all answer, and many people don’t recognize this fact.

Each bassinet model has a distinct maximum amount of time a baby can sleep in it.

In addition, each baby’s progress toward specific developmental milestones will vary.

This page has three useful charts (with sortable headings) that let you sort a large number of bassinets based on their maximum weight capacity. Additional milestones set by the individual manufacturers will also be available for your perusal.

It doesn’t matter if you already have a bassinet or if you’re trying to decide which one to buy; this should help you get the information you need.

Why you should get a bassinet?

First-time parents will need a safe and handy area for their newborn to nap or sleep. Between naps and nighttime sleep, newborns can sleep for up to 14 or 16 hours a day, so parents need a safe spot to put their infant down frequently. This vital duty can be made a lot easier if you have a bassinet handy. 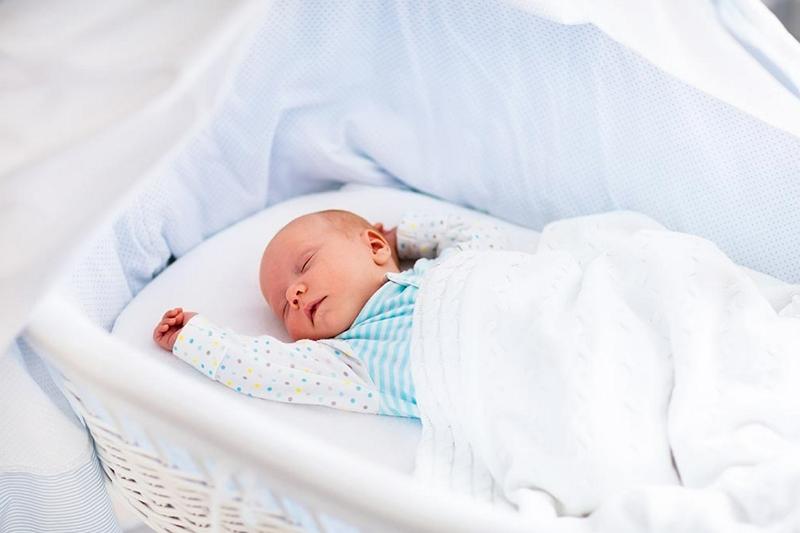 Convenience and safety are both provided to parents with the use of a bassinet, which can be placed in the living room or in the nursery.

Infants and newborns should be put to sleep on their backs on a hard surface like a cot or a crib, according to guidelines from the American Association of Pediatrics (AAP). There are no blankets, pillows, or toys allowed in the room where the child is sleeping.

As a further recommendation, the American Academy of Pediatrics (AAP) advises parents to sleep with their baby in the same room as their child for at least six months and even up to 12 months.

It’s a safe bet that you’ll need a bassinet to keep your kid in the same room as you. In addition to being compact, it gives your baby with the most comfortable place to sleep.

How long can baby sleep in a bassinet?

In most classic bassinets, you can keep your baby in it until he weighs 15 pounds or begins to push up on his elbows and knees on his own. Most babies reach these developmental milestones between the ages of four and five months.

One bassinet has a weight restriction of 33 lbs.

However, a baby’s weight is only one consideration when determining how long he or she may sleep in a bassinet.

The other piece of the puzzle is to work on your physical ability.

Skills like this make it more likely for an infant to climb out of their bassinets.

Manufacturers instruct parents to stop using their bassinet upon the first milestone that is reached, which can vary from product to product.

Examples of milestones that determine how long a baby can sleep in a bassinet:

It is important to remember that not all bassinets follow the same progression of milestones. Always refer to the product’s manual for precise instructions before using any new equipment.

The milestones of common bassinets with typical weight limitations are shown in the table below. A bassinet with a higher weight restriction will be discussed after that.

Which bassinets can be used the longest?

It’s likely that you’re wondering if there are any bassinets that may be used for a longer period of time.

However, there are various bassinets on the market that can support a lot more weight than those now in use.

When it comes to developmental milestones, the bad news is that in most situations, they are the same.

Choosing a long-lasting bassinet is one of the most important decisions you’ll make for your baby.

Are there other options that can be used even longer?

These do exist, you know.

Growing babies can be accommodated by a variety of goods that have adjustable characteristics.

These bassinets offer mattress heights that may be adjusted as your baby grows older.

How long should a baby sleep in a bassinet in mom and dad’s room?

As recommended by the American Academy of Pediatrics, parents should consider sleeping in the same room as their children “during the first six months, or ideally for the first year.”

According to the American Academy of Pediatrics (AAP), “Room sharing can reduce the incidence of SIDS by up to 50% and is much safer than bed sharing.”

However, room-sharing is not regarded a primary factor in reducing the risk of SIDS.

The risk of sleep-related death is virtually nonexistent if you follow the ABCs of good sleep hygiene. 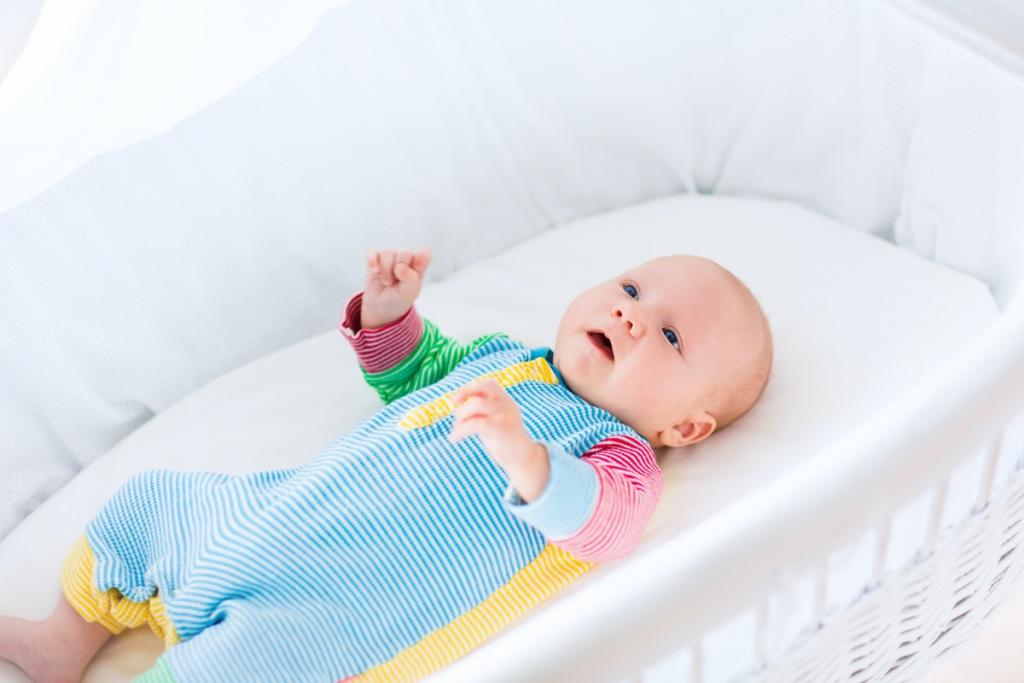 If you don’t want to share a room, you can still use other preventative measures like nursing (which reduces the risk of SIDS by 50%) and giving your child a pacifier before each sleep cycle (90 percent risk reduction).

Keep in mind that none of these safeguards stack.

Learn more about the subject of sound sleep hygiene.

Then what? Where should baby sleep when he outgrows the bassinet?

Graduating from a bassinet or playard is an option if your infant is too big, has reached one of his developmental milestones, or you’re simply ready for him to sleep in his own room.

To help you get started, here are some pointers:

Stick with it and you’ll get through it; it’ll be worth it in the long run.

P.S. If you haven’t already, try using a loud white noise machine to soothe your baby to sleep.

Do I need a bassinet?

You don’t need a bassinet, but you do need a safe place for your baby to sleep at night. There are just three types of baby sleep products that meet federal regulations: bassinets, cribs, and playards.

Sleep-related items that don’t fulfill CPSC guidelines include the following:

Due to the bassinet’s extremely short time frame of use, many families deem it unnecessary.

Using a crib or Pack ‘n Play from the beginning is quite acceptable.

Can a newborn sleep in a crib right away?

Yes! When your baby is just a few weeks old, you can begin utilizing a crib.

Cribs are the safest place for a baby to sleep. The same holds true for bassinets and playpens as well.

Go for it if you want to get your newborn acquainted to a crib right away. You won’t have to deal with another change afterwards.

How long can a baby sleep in a cradle?

Cradles can be used during the first five months of life and until a baby is able to stand on his or her hands and knees.

In order to get the most out of your product, it’s vital to read the instruction manual that came with it.

The cradle should be taken out of use as soon as your infant meets the first milestone.

Cradles must meet CPSC safety criteria in order to be used for sleeping.

Is there a bassinet age limit?

At what age should a baby be taken out of the bassinet?

Several bassinets have age restrictions. Other people have suggested age ranges. Some don’t even provide a minimum or maximum age range (but other milestones).

Examples of bassinet age limit verbiage can be found here:

Remember, as we’ve already talked extensively, that the first developmental milestone determines how long a baby can sleep in a bassinet.

When any of the milestones indicated in the manual are reached, it is critical to stop utilizing a bassinet.

When should babies start sleeping in cribs?

At this age, you should consider putting your child in his or her own cot.

There are specific safety benchmarks for each bassinet design. Depending on when your baby reaches a developmental milestone, you should discontinue using the bassinet.

Keep in mind the instructions in your user handbook.

Because there is a safe alternative to a crib: particularly, a Pack ‘n Play, there is no formal period for babies to begin sleeping in cribs.

How long can a baby stay in a bassinet during a single sleep period?

Safe sleeping areas include bassinets. As long as your baby sleeps through the night or takes an extended nap in their bassinet, it’s entirely acceptable. 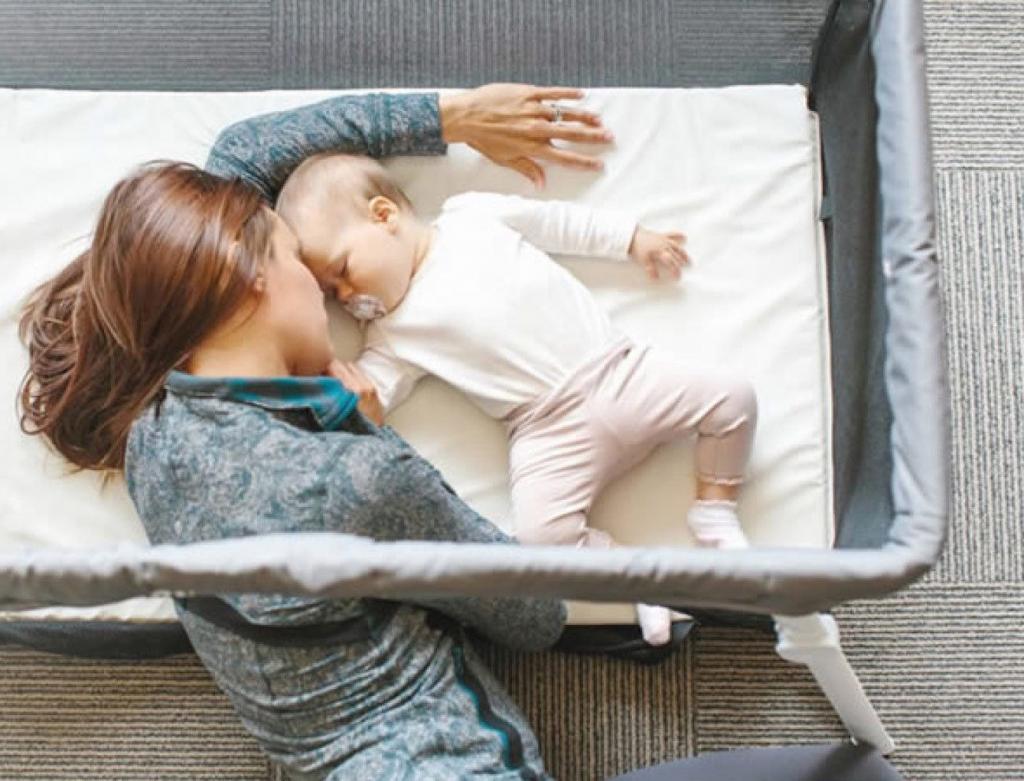 A baby can sleep in a bassinet for as long as necessary if you follow safe sleep practices.

Can baby sleep in bassinet if rolling over?

For some bassinets, rolling over is a significant event, while for others, it isn’t.

To find out if your baby can safely sleep in the bassinet after mastering roll-over skills, see the handbook that came with the bassinet.

This post’s graphs are likely to provide the data you’re looking for.

Is there a handbook for the bassinet? If not, you may just type in its name and “manual” on Google and you’ll find it. (Of course, make sure it’s the right one!)

User instructions for two popular bassinets specifically mention that the equipment should be discontinued as soon as a baby can roll over.