Screen Time and Insomnia: What It Means for Teens?

More than nine out of ten youngsters between the ages of 15 and 17 bring some type of electronics into the bedroom, according to National Sleep Foundation study results from 2014. Adolescents spend an average of nine hours a day in front of a screen.

Electronic devices are being used in education, entertainment, and social media. Blue light emitted by these electronic devices is causing some specialists to express concern about its impact on the sleep-wake cycle. As many as two out of every three teenagers fall asleep less than the required amount on a regular basis, and screen usage may be a contributing factor.

Contents show
1 How Do Screens Affect the Sleep-Wake Cycle?
2 Does Screen Time Cause Insomnia in Teenagers?
2.1 Which Devices Have the Biggest Impact on Sleep Quality?
2.2 What Are the Consequences of Sleep Deprivation for Teens?
3 Tips for Adolescent Screen Time and Sleep
4 How much sleep do children need?
5 Screen Time Before Bed Affecting the Sleep-Wake Cycle
6 Can Electronics Cause Depression?
7 Can I Help My Child Sleep Better?

How Do Screens Affect the Sleep-Wake Cycle?

Sunlight has a major role in the human circadian rhythm, which regulates sleep and wake cycles. We become more alert when it is sunny outside. In response to the onset of darkness, the body secretes the sleep-inducing hormone melatonin. 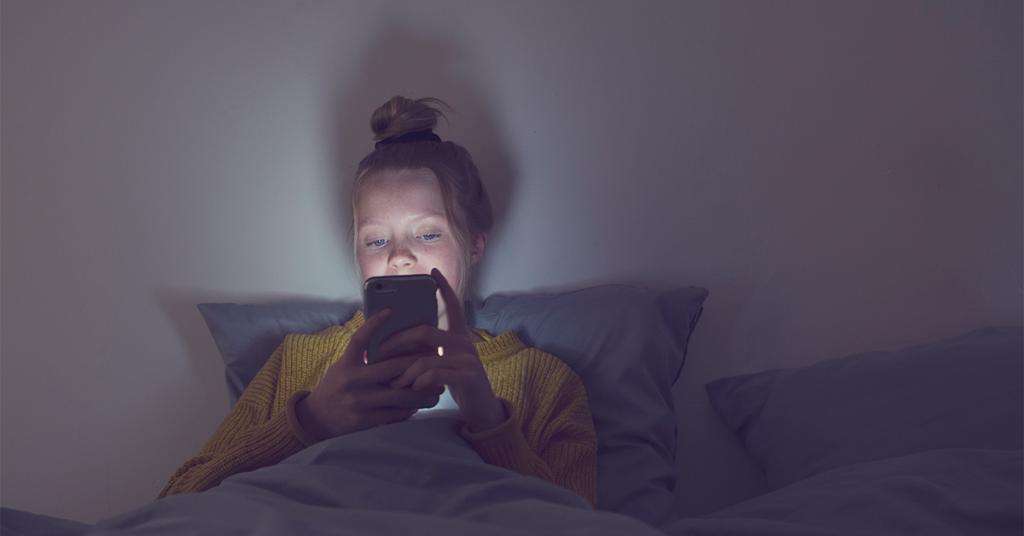 Some e-readers and tablets emit short-wavelength blue light that is extremely similar to sunshine, and this light can cause eye damage. Besides making us more awake, this light also fools our bodies into thinking it’s still sunlight.

Sleep-wake cycles are disrupted as a result of this decrease in melatonin production. The less sleep you get, the more time you spend staring at a device.

Does Screen Time Cause Insomnia in Teenagers?

An increasing amount of time spent on screens is associated with a wide range of insomnia symptoms in adolescents. As melatonin production is delayed, screen time pushes out bedtime and results in less peaceful sleep. Because most high school students must wake up at specific hours in order to make it to class on time, staying up later means they get less sleep and are more tired the next day. Circadian rhythms are thrown off by staying up late during the week and sleeping in on the weekends to make up for lost sleep.

Suppressing melatonin levels is one thing, but kids who spend too much time in front of screens may find that they are unable to get enough shut-eye. Using social media or watching a tense or violent movie right before going to bed can keep you awake and prevent you from falling asleep. It is also possible that passive technology, like as a television in the background or a smartphone that produces a sound, vibration and light, can have an impact on alertness and melatonin levels.

There’s some controversy about whether or not kids’ increased usage of screens at night is a cause of their sleeplessness or merely a consequence of their inability to sleep. Furthermore, heavy use of mobile phones is associated with an increased risk of insomnia because of the link between sadness and anxiety. As a result of this interaction, harmful habits may be worsened by poor sleep, excessive screen time, and bad emotions.

However, the general consensus is that screen time has a higher impact on insomnia than vice versa. Study after study has found a correlation between poor sleep quality and the presence of a television or small screen in the bedroom, such as a smartphone or tablet.

Which Devices Have the Biggest Impact on Sleep Quality?

Researchers aren’t sure if some devices are worse than others when it comes to causing sleep issues. If you’re using a computer or tablet in the hour leading up to bedtime, you’re going to have a hard time sleeping.

With technologies that need active usage, such as smartphones or video game consoles, some experts believe that sleep suffers more. Others believe that because they are held closer to the face, smartphones may have a greater impact on melatonin levels than televisions. Sleep is also affected when teens use devices in a dark setting, probably because their pupils dilate and allow more blue light to pass through.

In general, the more time a teen spends staring at an electronic device, the more likely they are to have trouble sleeping. Additionally, youths who use their phones to contact with friends before going to bed may experience sleep deprivation as a result of staying up later to await a response. Finally, it has been demonstrated that waking teens up with notifications of incoming texts from a phone that is left on standby all night can cause sleep disturbances.

What Are the Consequences of Sleep Deprivation for Teens?

As a teenager, sleep deprivation can affect mood, emotional stability, and academic performance. Chronic sleep loss can lead to a weakened immune system, sadness, and suicidal thoughts in teenagers who don’t get enough sleep.

Obesity is a risk factor for both sleep loss and screen time, especially if screen time replaces exercise. A lack of sleep can lead to an increase in daytime weariness, which is especially problematic for young drivers. 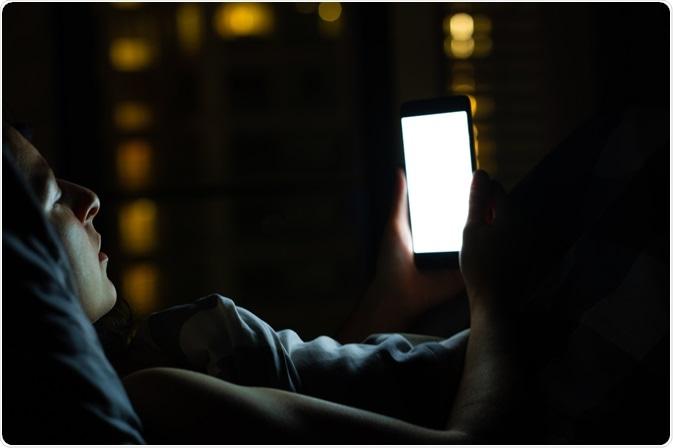 Organizations such as the American Academy of Pediatrics prefer not to set a precise number on the recommended screen time for teens because teenagers need to utilize screens for scholastic and social duties. Instead, they encourage parents to create their own family media strategy.

It’s critical that a social media strategy for the whole family establishes restrictions on screen time while also allowing for adequate time for rest, family time, schoolwork, and physical activity. Consider sitting down with your teen and drafting a “screen time plan” together. Teens respond best when given the opportunity to contribute to the creation of their own rules. Do these things as part of your continuing effort to enhance your teen’s screen use behaviors and sleep environment.

There should be no screens in the bedroom. As a rule, the bedroom should be reserved solely for sleep. While it’s possible to keep technology out of the bedroom, this isn’t always the case. It is best if your teen refrains from using technology in the bedroom at least an hour before night. Blue light-blocking eyewear or smartphone applications may also help young people sleep better at night.

Parents can set a good example for their children by minimizing their own time spent in front of screens.

How much sleep do children need?

Humans have a circadian rhythm that is influenced by the amount of sunshine they are exposed to. As a result, our bodies are more alert throughout the day, and more tired at night. As the night wears on, our bodies create the sleep-inducing hormone melatonin.

In the same way that the sun emits blue light, electronic equipment such as computers, laptops, cellphones, televisions, and others do, too. The emission fools our body into thinking it’s still sunlight, preventing us from falling asleep. Extra blue light consumption at night causes the body to become more attentive, making it more difficult to fall asleep.

The body’s natural sleep-wake cycle is disrupted as melatonin production decreases. Because of this, the more time spent in front of a screen before bed makes it harder to drift off. If you don’t get enough sleep, you may end up suffering from insomnia. Can Electronics Cause Depression?

Overexposure to electronic devices, as well as shorter or restless sleep, have been associated to an increase in insomnia and depressed symptoms among adolescents, according to a study presented at SLEEP 2018, the 32nd annual meeting of the Associated Professional Sleep Societies at SLEEP 2018.

This sleep study looked at how various electronic activities affect the quality of sleep and mental health of adolescents. There were 2,865 adolescent participants, an average age of 15 to 16 years old, who completed the survey. When it came to their sleeping habits, individuals were quizzed on concerns such as difficulty getting asleep, difficulty staying asleep, and how much sleep they typically get.

The CES-D exam, a clinical screening for depression, was administered to these pupils as well (the Center for Epidemiologic Studies Depression scale test). Social messaging, web surfing, TV/movies, and gaming were the four electronic activity that teens reported spending the most time doing.

Long periods of social messaging, web surfing, and TV/movie watching were found to be associated with an increase in insomnia symptoms and decreased sleep, according to the study’s findings. An rise in depression symptoms was caused by a lack of sleep.

According to the results, increasing the amount of time spent on any one activity is closely related to getting even less sleep, which can lead to even more depressing side effects.

Can I Help My Child Sleep Better?

Gaming has been found to have a greater impact on depression symptoms than texting, according to sleep-medicine studies. In order to prevent your child from becoming overly dependent on gaming, you should try to limit the amount of time they spend in front of a screen.

If the findings of this study are utilized to motivate parents to limit their children’s usage of personal electronics, Dr. Lauren Hale, a professor at Stony Brook Medicine, expects it will have a positive impact.

This study suggests that parents, educators, and health care providers should think about ways to help their children sleep better and deal with sadness by limiting their time spent in front of screens, according to Hale.