Are Sleep Needs Different For Women and Men?

A good night’s sleep is essential for both men and women. It is recommended that healthy individuals of any sex obtain between seven and nine hours of sleep per night, according to the National Sleep Foundation. More sleep is needed by teenagers and younger children.

On average, women in the United States obtain more total sleep per day than men, including both nighttime and daytime naps. In a big study, the average difference in time ranged from five to 28 minutes, depending on the age of the participants.

In addition, women have a harder time getting a good night of sleep. As a result of poor sleep quality, some experts feel that women have increased the amount of sleep they get.

Consider the fact that sleep can vary greatly from person to person and is affected by a wide variety of things. Studies indicating disparities in sleep quantity or quality reflect an aggregate; it does not suggest that all women sleep more or have lower-quality sleep than males. 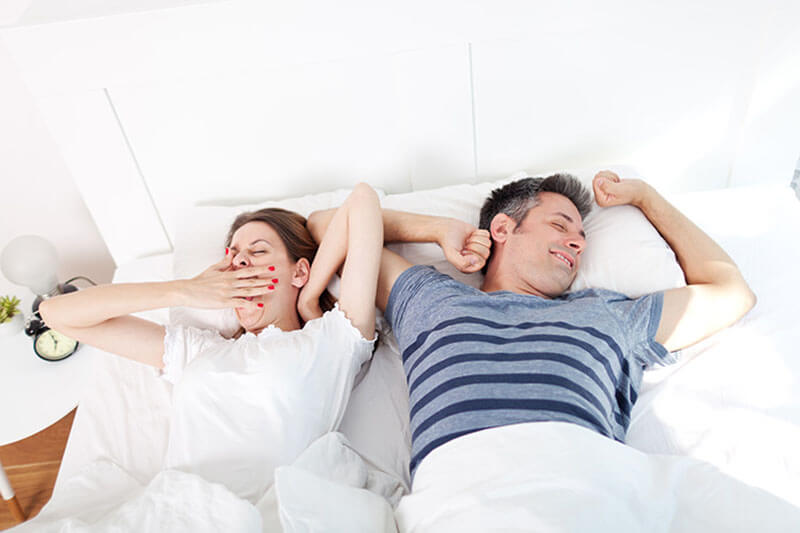 There are disparities in the sleep cycles of men and women, which contributes to the fact that they sleep differently.

During a typical night of sleep, three to five sleep cycles are typical. There are three separate stages of sleep in each of these cycles, which last between 70 and 120 minutes. Rapid eye movement (REM) sleep is one of four sleep stages; the other three are non-REM (NREM).

Sleep architecture refers to a person’s pattern of movement through the stages of sleep, each of which adds to the overall restorative effect of the sleep cycle.

In terms of the structure of their sleep, women and men are different. Women spend less time in stage 1, the lightest stage of sleep, and more time in stage 3, the deepest state. Evidence suggests that this gap begins between 30 and 40 years old.

Differences in circadian rhythm between men and women can have an impact on the quality and quantity of sleep they get, even if they are slight.

The body’s 24-hour internal clock is known as the circadian rhythm. Using synchronized timing, this clock aids in the regulation of a wide range of physiological functions, including sleep.

A regular sleep cycle is made possible by a healthy circadian rhythm, which keeps us alert throughout the day and asleep at night. For example, those who aren’t in sync with their circadian rhythm are more likely to have sleep interruptions, daytime tiredness, and other health issues.

Men and women have different circadian rhythms, according to research. Contrary to popular belief, the internal clocks of women tend to be a few minutes slower than those of men. To put it simply, women have a tendency to go to bed and wake up earlier than males. 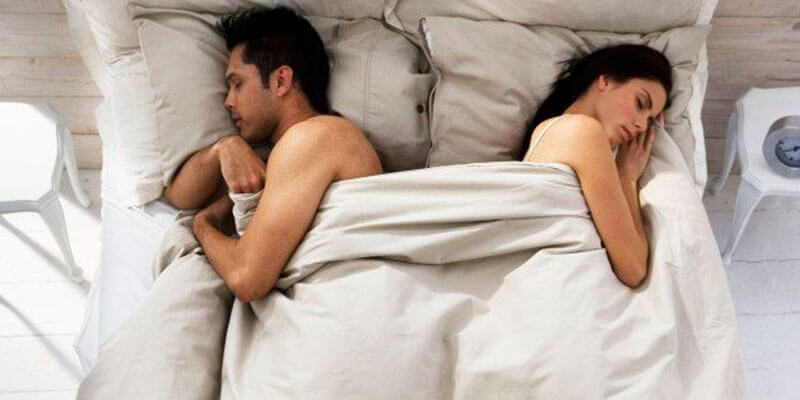 When it comes to sleep, men and women are vastly different. During various stages of a woman’s life, changes in hormone production can cause major sleep disturbances:

There are considerable changes in the production of estrogen and progesterone during the menstrual cycle, which begins during puberty. A decrease in these hormone levels just before the onset of a woman’s menstruation can have physical and emotional consequences, including sleep disturbances. Premenstrual syndrome (PMS) and premenstrual dysphoric disorder (PMDD) might be diagnosed when these effects are particularly disruptive to a woman’s life (PMDD). PMS and PMDD are both associated with significant difficulties sleeping.

During pregnancy, a woman’s body undergoes significant hormonal changes, which can make it difficult for her to fall asleep at night. These alterations may have an impact on sleep patterns and time. Throughout the first trimester of pregnancy, women’s hormones begin to change, but many pregnant women report sleeping less during the third. Insomnia-like symptoms are common in about half of all pregnant women, and they can last far into the postpartum period.

During menopause, a woman’s reproductive system undergoes a major shift in hormone production. Perimenopause is a transitory period that begins a few years before menopause. More than 85 percent of women experience sleep disturbances throughout perimenopause and menopause due to hormonally-induced shifts in circadian rhythm as well as irritating hot flashes and night sweats.

Men, too, may be affected by hormonal changes that occur with aging. Growth hormone production declines with age, but cortisol levels, a stress hormone, rise. Poor sleep can alter the levels of these hormones, but it can also result in more frequent awakenings and poorer sleep quality as a result of these changes.

Men’s testosterone levels can decline as they get older. The breathing ailment obstructive sleep apnea (OSA) has been linked to reduced testosterone levels in several studies. Obesity and male hormones appear to have a complex interaction, but more research is needed to understand the link between testosterone and sleep.

Underlying medical conditions, many of which do not impact men and women equally, can interfere with your ability to get a good night’s sleep.

Depression and anxiety, two common sleep disorders, affect women more than men and can make it difficult to get to sleep or stay asleep. Nausea at night, which affects more than 75% of women over the age of 40, has been linked to a higher incidence among women of incontinence and overactive bladder. If you suffer from heartburn or acid reflux, you may not get a good night’s sleep. 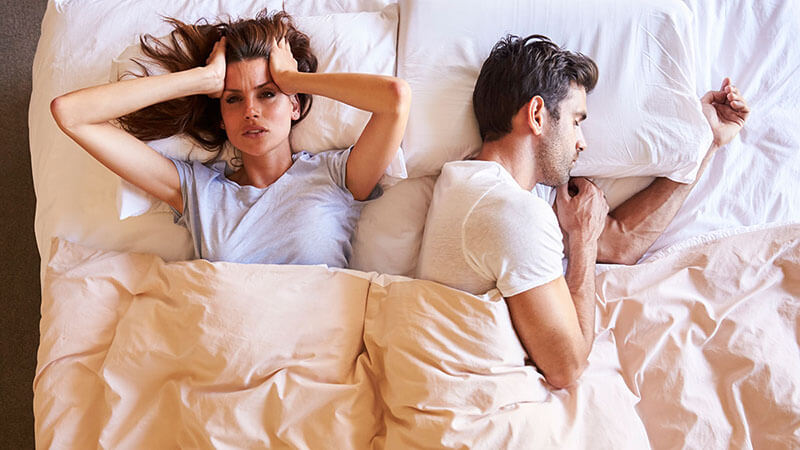 Women’s and men’s sleep patterns are influenced by societal and cultural standards that have different impacts on the sex lives of each gender. Individuals may have different experiences with sleep as a result of these complex rules.

The primary example of a factor that impacts sleep in a gendered way is caregiving. As a result, women are more likely than males to serve as informal caretakers for the elderly, children, or ailing members of their families. Caregivers’ sleep is disrupted more frequently and their overall stress level rises, which can have a negative impact on their ability to sleep.

Opportunities for work, work schedules, and the allocation of family duties can be affected in some way by gender norms in the workplace and at home. When it comes to sleep and hygiene, women are often affected by these social norms because of the added stress they put on their bodies. However, these conventions can have an impact on men as well. Men, for example, may experience increased cultural pressure to be wage earners, resulting in reduced sleep time.

Which Sleep Disorders Are More Common Among Each Sex?

As a result, men are more likely to suffer from a deadly sleep disorder known as sleep apnea. Between the ages of 30 and 70, moderate to severe OSA is predicted to afflict 13% of men and 6% of women. OSA disrupts sleep on a regular basis and has been linked to heart disease, depression, and other health concerns.

OSA is more prevalent in males than in women, however this may be due to the fact that men and women are diagnosed differently by doctors. This results in less referrals to specialty sleep clinics where OSA is generally diagnosed because women’s symptoms are often interpreted differently.

Restless leg syndrome, a sleep problem that causes a strong need to move the limbs, is more common in women. When pregnant, it occurs more frequently, which is why it is more common among women.

It is physically and mentally damaging to suffer from sleep deprivation. Sleep deprivation has the same negative effects on men and women, with only modest variances.

According to a poll conducted by the National Sleep Foundation in 2007, almost 80 percent of women stated that they simply accept their tiredness and continue on with their lives. A “sleep debt” can be quickly accrued by women who have had a period of inadequate sleep.

If your circadian clock is out of sync with daylight and darkness, both sexes might experience major consequences. However, women may be more vulnerable to the effects of jet lag or shift work because of the disparities in circadian timing between men and women. Women who work night shifts may be more prone to workplace mishaps, according to studies.

The focus of most sleep research has been on the individual, however this is not always the case. If their spouse is male or female, this sleeping position can have an effect on their nocturnal slumber.

For both men and women, sleeping in the same bed can cause sleep issues. Because men snore more than women, those who share a bed with a man may have their sleep disrupted more frequently. Having a spouse with a different circadian rhythm and sleep schedule might cause even more sleep disruption. Obviously, the impact of these elements might vary greatly depending on the individual circumstances of each couple.

Women’s sleep health is significantly impacted by mental health disorders, however men’s isn’t. Women are more likely than men to suffer from depression, and this is especially true as puberty arrives, as is the accompanying insomnia. 35 Caregivers are more prone to suffer from stress, sadness, and sleep problems in middle age than non-caregivers. 63,64 Female shift workers have a harder time adapting because of sleep issues, which is why women make up half the workforce. 65 Poor sleep quality, breast cancer, and shorter menstrual cycles have been linked to shift work among women, as have miscarriage and infertility. 65,66 Research into how these distinct psychosocial difficulties might be integrated into biological research is needed. Women in their 40s and 50s are particularly sensitive to quality of life indicators and stressors that are unique to their culture. Posttraumatic stress disorder (PTSD) is a risk factor for insomnia in general, but it is more severe in women veterans, who are also more likely to suffer from sleep disturbances as a result of PTSD. 67

Other conditions, including as discomfort and overactive bladder (OAB), might impair a woman’s sleep. 7 percent of women over 60 have fibromyalgia, a chronic pain disorder marked by poor sleep efficiency. 68 In older women, poor daytime performance, physical decline, and functional limits are all linked to sleep disturbances. 69 Older women’s quality of life deteriorated as their overnight sleep fell short of seven hours. 69 In the meanwhile, further long-term research are needed to evaluate whether poor sleep is linked to deterioration in physical performance.

The disparity between objective measures and subjective assessments of sleep quality in women may be due to a lack of acceptable factors and methods for measuring sleep quality in women. Women’s sleep health may be improved with better long-term research that incorporate relevant characteristics and demographics. Making these data more widely available to health care providers is critical to making progress in treating women with sleep disorders and diseases.

Alcohol and Tobacco Use May Disproportionately Affect Men’s Sleep

Men, on average, are more likely than women to engage in binge drinking. There is a minor chance that they smoke cigarettes as well. A lack of sleep has been linked to both smoking and drinking.

Men have typically been the focus of sleep studies, therefore more work has to be done to better understand how women sleep. In spite of this, researchers are increasingly focusing on the disparities in sleep patterns between men and women. An awareness of these concerns may lead to a better understanding of how to best treat sleep disorders in each particular patient, as well.