What Sleep Disorders Are Common in People With Dementia?

Memory, language, problem-solving, and other cognitive functions are all affected by dementia, which is an irreversible decline in brain function. Dementia is an umbrella term for a number of distinct conditions, many of which affect the elderly. Dementia is characterized by brain cells that don’t function properly and die off at a faster rate than in persons without dementia. Dementia has no known cure, however, there are therapies available to halt its progression.

Dementia patients often have sleep issues, and this can worsen the other symptoms of the disease by making them more severe. One of the most upsetting symptoms of dementia, according to family caregivers, is sleep deprivation. Treatment of sleep problems is an important element of dementia care since it relieves stress on patients and caregivers while also perhaps slowing down the rate at which their cognitive abilities deteriorate.

How Does Dementia Change Sleep Patterns?

As our body and mind respond to environmental cues, our circadian rhythm helps us regulate our sleep-wake cycle. In people with dementia, their circadian rhythms are fundamentally altered, making it difficult to achieve a good night’s sleep on a regular basis.

For example, when we see light, the suprachiasmatic nucleus (SCN) tells us when we should be awake and when we should be asleep. In people with Alzheimer’s disease, the most common form of dementia, the SCN has been destroyed and the activity of the cells has reduced. Patients are typically unable to maintain a 24-hour sleep-wake cycle, and instead, sleep excessively during the day and significantly less at night as a result of this dysfunction.

Dementia is also linked to alterations in sleep patterns. While sleeping, our bodies go through a series of stages. The first two stages are known as light sleep, the third stage is called slow-wave sleep, and the fourth stage is termed REM sleep (also called rapid eye movement or REM sleep). Slow-wave sleep and REM sleep are two of the most important aspects of sleep’s ability to repair the body and mind. Slow-wave sleep and rapid eye movement (REM) sleep are less common in people with dementia, and more time is spent in the earlier stages of sleep. As the disease worsens, the loss of deep sleep and REM sleep might get even worse.

Many sleep changes in healthy aging persons have been identified through research. Bedtimes and waking times are changing earlier and earlier, and sleep patterns are becoming more fragmented and less restorative, with less time spent in slow-wave and REM sleep. Changes in sleep patterns in those with dementia are more drastic and disruptive, while they share some characteristics with those without the disease. 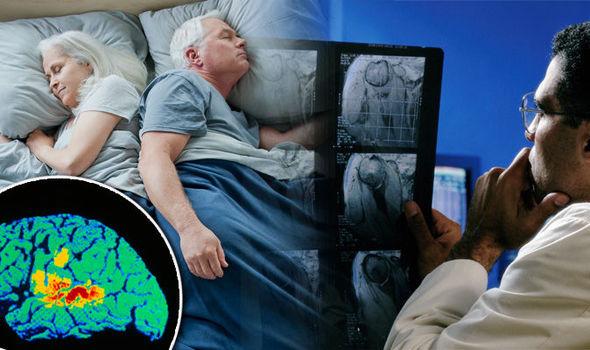 What Sleep Disorders Are Common in People With Dementia?

Other Sleep Issues in People With Dementia

The term “sundowning” refers to the increased agitation experienced by people with dementia at the end of the day and in the evening. Anxiety, restlessness, and outbursts of rage are all signs of sundowning. Insomnia and other sleep disorders can be exacerbated if sundowning habits are carried on late into the night. In dementia, circadian rhythm disturbances, weariness, sadness, and pain are all possible causes of sundowning.

They may shrink or cry out in the middle of the night when they can’t sleep. Alzheimer’s sufferers have a tendency to walk away from their homes at night, which can be quite dangerous. REM sleep behavior problem in dementia patients is associated with a variety of activities, including yelling, grabbing, jumping, and more.

How Does Sleep Affect Dementia Risk?

According to some experts, there may be a reciprocal association between sleep and dementia. Because sleep influences both dementia risk and symptoms, it’s important to remember that the presence or absence of dementia might have an impact on how well you rest at night. For example, the accumulation of a protein called amyloid-beta in the brain is one of the early signs of Alzheimer’s disease, which eventually forms clumps known as amyloid plaque. Sleep deprivation has been demonstrated to raise the levels of amyloid-beta in the brain in animal studies and limited research in humans. The quality of sleep in Alzheimer’s patients with amyloid plaques was found to be worse than in those without the plaques.

In addition, sleep has long been recognized as a vital component of our cognitive and memory development. Sleep problems have been linked to cognitive decline and dementia in observational studies. These studies, on the other hand, do not prove a causal link. Research into sleep and dementia risk is still in progress, but there are a number of established ways to improve your sleep.

What Can Help Someone With Dementia Sleep Better?

Dementia patients’ sleep problems can be alleviated by practicing good sleep hygiene. It is possible to improve the quality of your sleep by implementing a variety of sleep hygiene activities and environmental concerns. Dementia sufferers can benefit from the following suggestions for good sleep hygiene:

People with dementia may find some of these sleep hygiene routines difficult. In a nursing home or assisted living facility, for example, it may not be able to manage the noise level in the bedrooms. To reduce the impact of outside noise, think about installing a white noise machine. Even if a person with dementia struggles to keep a regular bedtime owing to snoozing or a wide range of daily activities, having a regular wake time can help the circadian rhythm remain stable. A doctor or sleep specialist can provide tailored advice on sleep hygiene for a particular situation. 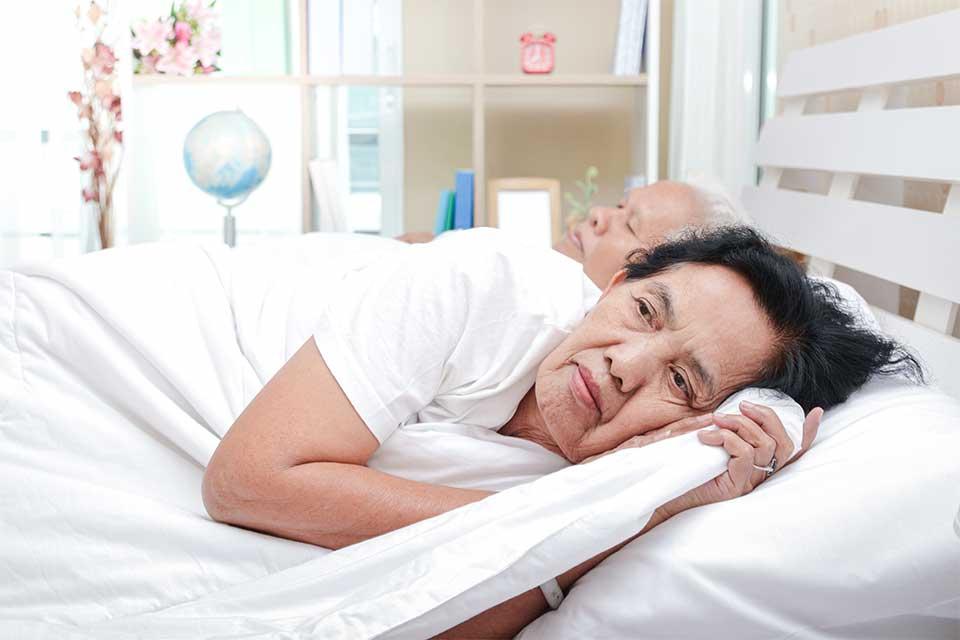 The Role of Medication

For patients with dementia, medication is considered a last-ditch effort. Increased confusion, sedation, and a heightened risk of injury or death are among the potential side effects of sleep aids. Before administering a sleep aid to a person suffering from dementia, consult with a physician.

People with dementia often have more difficulty falling asleep than the average senior. People with mild to moderate dementia and those with severe dementia may experience sleep disturbances. As the severity of dementia worsens, so do sleep difficulties.

Excessive daytime drowsiness and insomnia may be signs of a more serious problem with sleep. Many people have frequent nighttime awakenings and early morning awakenings.

Dementia patients may also experience a phenomenon known as “sundowning” in the evening or at night. They may be angry, worried, and even violent if they are in this state. When you’re in this kind of headspace, it’s risky to go out at night.

Alzheimer’s patients are also more likely to suffer from obstructive sleep apnea. During sleep, breathing may stop and start repeatedly due to this potentially dangerous sleep disorder.

Sundowning and sleep disruptions may be caused by the following factors:

Both you and the individual with dementia can suffer from sleep difficulties. For a better night’s rest:

When a loved one wakes during the night

Even if you’re fatigued, try not to panic if the person with dementia gets up in the middle of the night. Don’t get into a debate. Instead, inquire about the person’s needs. Discomfort or pain may be the cause of nighttime agitation. Find out what’s causing the issue, such as constipation, a full bladder, or an uncomfortably hot or cold environment. 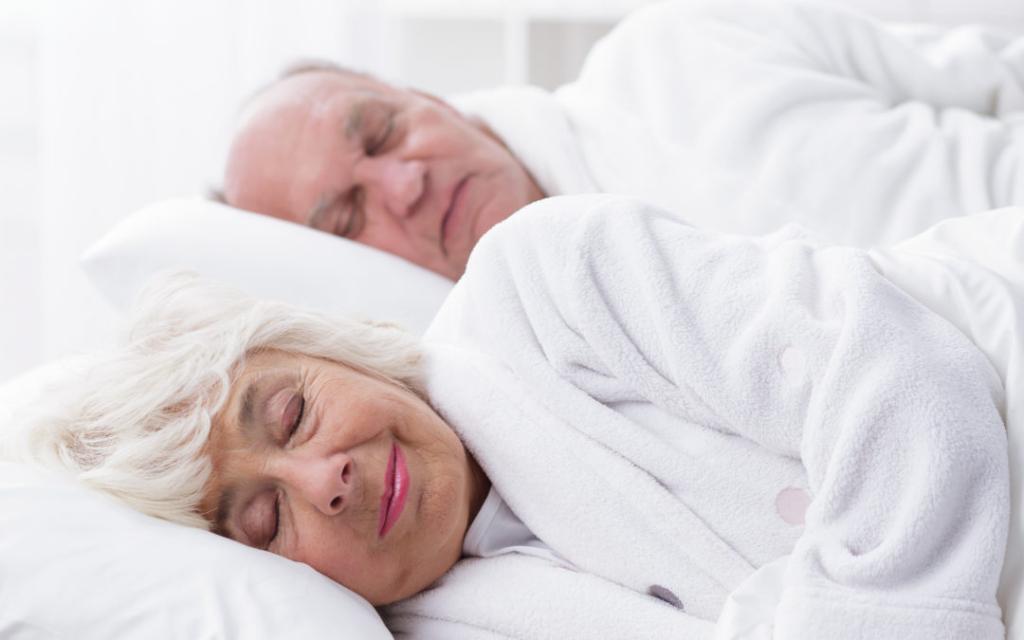 Let them know that it’s becoming late and they should get some rest. Don’t constrain the person if he or she needs to pace. Allow it, but only if you can keep an eye on it.

The doctor may prescribe sleep-inducing drugs if non-drug treatments fail.

The risk of falls and confusion in elderly adults who are cognitively challenged is increased by the use of sleep-inducing drugs. The use of sedatives to induce sleep is generally discouraged for people in this category.

As soon as a normal sleep schedule has been established, the doctor may suggest discontinuing the use of these medications.